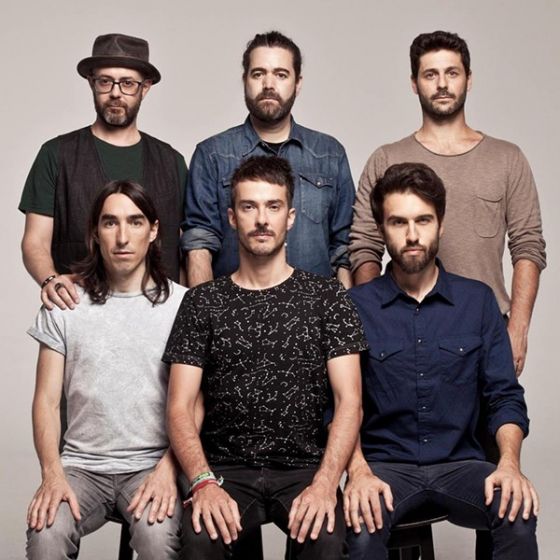 Vetusta Morla, iconic band in the Spanish alternative rock scene, came for the first to Germany in 2014. In Spain and Latin America, they are considered one of the greatest bands to play live. Back in 2009 they carried out successful tours through Argentina, Mexico, Columbia and the USA. Their powerful performances and sold-out concerts have made them win a loyal and a solid fandom. The band from Madrid formed by six friends ten years ago has so far released four successful albums Un día en el mundo (2008) and Mapas (2011), La Deriva (2014) and Mismo Sitio, Distinto Lugar (2017). Both the band and the records have received numerous awards, such as the “Premios de la Música” (the Spanish equivalent to the Brit Awards) which they have won three times, four UFI Awards (Independent Music Award), as well as two Rolling Stone awards, among others.

Their third studio album La Deriva, more than any of its predecessors, is a result of its circumstances, hero and victim of its process and its context. The band wrote the album during a very short period of time while being surrounded by a heap of emotional, social and political factors that in the past few years almost everybody has named 'crisis'. It is one of those words, so misused and worn down, that it has lost its meaning. It was important to find an alternative word, so necessary to move forward, to describe more accurately a certain personal or collective reality. Vetusta Morla found that alternative term to 'crisis' in the 'drift' (La Deriva).

All four albums have come out under their own label, Pequeño Salto Mortal, which they founded as an alternative to the usual paths of the record industry, that seemed to have no room for them when they first appeared on the music scene.

To coincide with their first proper Germany tour, the band released a special German edition of La Deriva under GMO – The Label in the German-speaking countries, that includes two previously unreleased tracks: Puntos Suspensivos (Three Dots or” Ellipsis”) and Profetas de la Mañana (“Morning Prophets”). But they are not the typical bonus material for a typical special edition. These two songs were specifically written to close the record, and intentionally play the role of an ending, an epilogue, a 'to be continued' or a farewell to everything said before.

Their latest album Mismo sitio, Distinto Lugar was published in 2017 and contains a much more colourful range of songs. The band had a different starting point and they came up with a new way of channelling their energy. They decided to catch hold of the atmosphere present in the legendary Hansa Studios in Berlin, and that is why most of the tracks are recorded there. There are tracks which are delivered slowly and with precision, paying special attention to the message (“Consejo de Sabios”, “Punto Sin Retorno” or the wonderful “El Discurso del Rey”). Other tracks release an engaging energy and driving melodies (there we have the powerful “Te Lo Digo a Ti” or “Palmeras en La Mancha”). This fourth album seems to root in their first record and to maintain its scent, but, according to the band’s constant need of evolution, the songs and their message are more in line with current events and ideas.