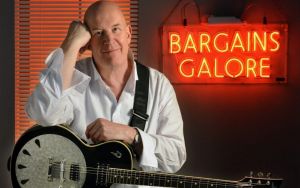 The singer, song-writer Julian Dawson was born in Kent (England) in 1954. He started out with some solo performances and an Art School band he had, but he soon found in singing his calling. He then joined his first professional band and planned to move to Germany to play for the US forces there. He then decided to leave England and moved to Frankfurt following The Beatles example. After some time in Germany and having moved back to England, he decided to record his first album, which was called Let Out the Pig and began touring through Europe.