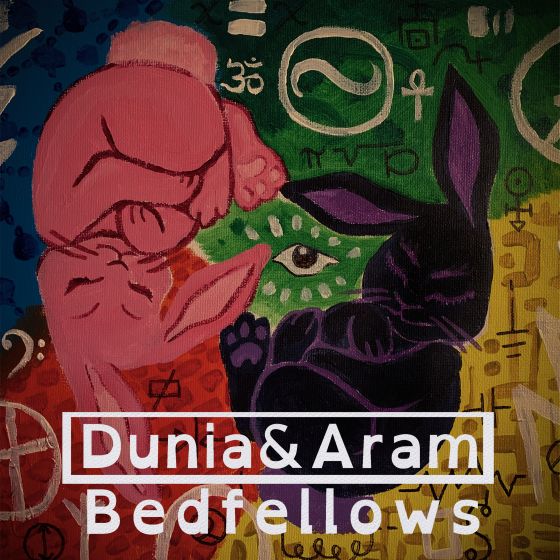 „Tender and tough, lilting between dub, ska and soul, ‘Bedfellows’ is the sound of symbiosis, steeped in their shared sensibility of New York and punky reggae.” Vivien Goldman

Even if Dunia and Aram are releasing their debut album in 2022, produced by legendary German DJ and producer Hans Nieswandt, the two have been making music together for over two decades, both as a duo or with the bands Dubistry and Brand New Girl, which they have also co-founded. The sound of the duo moves between sunny-melancholic, wonderfully puristic and intimate-sounding singer-songwriter melodies. They also have a taste for 60's and 70s sounds, and ska, punk, soul, and reggae, which they mostly blend with sounds of ukulele and double bass.

The duo calls their music "Street Sound", whether they may be playing in acoustic and electrical format. The term helps the two-piece band, who are also a couple, bring their musical perspective, natural intimacy and symbiosis closer to their fandom. The process is perfectly described by Vivien Goldman, post-punk icon and friend of the pair: "Their intimacy helps this music feel serene and true, helps you tap into the veins of your emotions and maybe even feel release. Feel like we're fellow spirits with these in-tune bedfellows.”

The first single from the album could be no other than their own rendition of Vivien Goldman's famous 1981 track "Launderette", described by NPR as "a charming snapshot of London life". For Dunia and Aram, the song has become the starting point and identity-defining element.

As the first of the eleven album tracks “It's Never Easy” has fresh ska elements and gives us a first insight into what we can expect on this journey. With a groovy and jazzy melody over the hardships of teenage years, it continues with “One More Girl”. In “Cool and Dry” reigns the harmony and in “Music Be My Lover” Aram takes over the lead vocals. "Music be my lover” and “Music Is The Language Of Eden” are two love letters to music, one of them sustained by bass tones and warm-sounding vocals, and the other sprinkled with reggae rhythms. Reggae also inhabits partially tracks like “So far away, 8th street”, in which the composition then develops into a reclined acoustic tune.

In addition to Goldman's "Launderette", there are two other cover versions: the song "Strange Fruit" by Billie Holiday, originally commissioned by the organization Specialized Project in honor of the #BLM movement, and David Bowie's "The Man Who Sold The World". The track “After The Rain” concludes the album with the inspiring words “After the rain, the sunshine; after the darkness, light; after the footsteps, stillness; we are gonna get up, and stand up and fight.”

When Dunia Best and Aram Sinnreich are not making music together, Aram is a Professor and Chair of the Communication Studies division at American University’s School of Communication in Washington and writes books on topics such as the connection between music and technology, intellectual property or music piracy. He is currently working with Jesse Gilbert on the non-fiction book The Secret Life of Data and with Rachel Hope Cleves on the science fiction novel SavePoint. In addition to his musical projects with his partner Dunia Best, he has also worked with vocalist Ari Up, best known as a member of the British punk rock band The Slits.

Dunia Best is a singer, poet, composer and multi-instrumentalist. She is the member and co-founder of several bands like Agent 99, Dubistry and Brave New Girl, which are mostly rooted in reggae, ska and jazz.

Tweet
Tagged under
More in this category: « Dunia & Aram release new single "After the Rain" on June 24, 2022 The album "l'univers parallèle" by toi et moi now as vinyl as well! »
back to top
Subscribe to this RSS feed
News