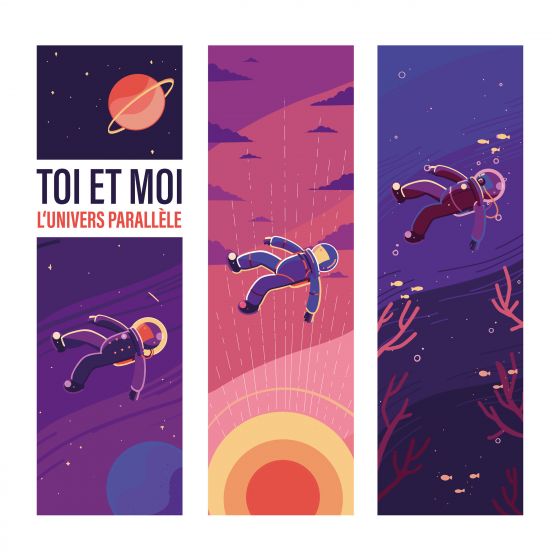 The German duo toi et moi knows how to create closeness. "You and I" [English for "toi et moi"] means dialogue, intensity, and intimacy. Julia Klomfass and Raphael Hansen, the two band members, are masters of balance, wonderfully versatile, with Julia's large instrument box and a lot of joy and curiosity about spontaneous excursions into different tempos and genres.

Their fifth studio album L'Univers Parallèle is now devoted to those excursions. "This time we have deliberately set no limits and made sure that we search for and record all the instruments and sounds that each song requires," explains Raphael Hansen, who contributed most chansons as well as all the guitar arrangements and styles. The multi-instrumentalist Julia Klomfass, also successful as a theatre and radio play composer, loves to design the right soundscape for every story.

The ride through space and time of francophone pop music is held together by two wonderfully harmonious voices, which repeatedly reposition themselves in duet and take on a wide variety of roles. The album was recorded halfway around the world, with trumpets played by Jenny Ball (from Jenny and the Mexicats, Mexico), percussion by Andreas Süsterhenn (Switzerland), double bass by Madelana Graca (Portugal), Julia's recordings from Ulm (Germany), as well as Raphael's guitars, and drums by Bodo von Zitzewitzs from Cologne (Germany).

“We took the liberty of allowing everything that musically adds up,” Julia adds. “On the one hand, there were very intensive, joint recording sessions in the living room studio, and on the other hand, it a completely new experience to create in the distance. In any case, both phases were characterised by taking the time to try everything without pressure, and with great ease." Among the four songs Julia has written for this album–more than ever–Raphael's favourite “Quatre Pieds” is an example of her contributions to the album. He is inspired by Julia's theatre work in Ulm and the eternal doubt about how one lives better: Alone or in a relationship? "Four feet always make more traces...".

Despite all the wildness, the fifth toi et moi album also has its melancholic-romantic moments. But before Julia tells the story of a lady-in-waiting in “La Barbe de Capucin”, who, while waiting for her beloved Jacques, turns into a flower on the side of the road, Raphael slams a wavelike rock song in between. The track is a wake-up call about chemtrails and other conspiracy nonsense.

In the two songs that close the album, both artists remember their grandparents. In one of them, they remember Raphael's French grandfather, who loved to fish at the Saône and left him the love for nature. "La Saône" was written along with another grandson, Raphael's cousin Robin Kirklar, who contributed by playing the viola. The song “Tu me Manques” is dedicated to Julia's grandmother, whom she misses very much, even though she often feels her very close. And this is how this journey through space and time slowly comes to an end gently and familiarly as well as a little chamber-music-sounding.

toi et moi have used the last two years of uncertainty and isolation to open new doors, to give space for fresh ideas, to free themselves in many ways, both on large and small scales. The risk was worth it, L'Univers Parallèle shows the enormous versatility and creativity of the duo. "Many different songs have been created here, but they are still toi et moi," says Julia, "It is even more colorful, more diverse due to the many featured artists who have brought in even more colors and ideas. This and the free collaboration make the album very special for me.”

You can already listen or order the album here: https://toietmoiband.lnk.to/luniversWE

The music video to their single "le matin en vélo" is already available on YouTube: